Biological cells live in a noisy world and process information in a stochastic manner.

I am interested in information flow in small biochemical sensing models. My research spans from fundamental aspects of information thermodynamics and stochastic calculus to the application of these concepts to understand biological function. In particular, we study the biochemical implementation of cellular decision making during chemotactic search in time-varying environments.

Motile cilia are slender cell appendages found on the surface of mammalian airways, brain ventricles, and the oviduct. These cilia beat rhythmically, often in a coordinated fashion, to pump fluids such as mucus or cerebrospinal fluid effectively. This metachronal coordination in cilia carpets , similar to a Mexican wave in a soccer stadium, presumably  originate from hydrodynamic interactions between neighboring cilia. Yet, basic questions like “how does the direction of metachronal waves is set by the shape of the cilia beat” are open.

We study metachronal coordination in cilia carpets from a physicists' perspective, modeling each cilium as a noisy phase oscillator, coupled to its neighbors (similar to the Kuramoto model with local coupling). Using multi-scale simulations and theory, we answer questions of multi-stability of metachronal waves, as well as their robustness to active fluctuations.

Diatoms are a large group of single-celled algae that are prominent for their ability to deposit silicic acid into intricate patterns of biosilicified cell walls: diatoms live in glass houses. Their cell walls display a bewildering architectural complexity with hierarchical pore patterns, ribs and spikes. Yet, the physical mechanisms that shape these lightweight structures remain poorly understood. Recent computational models can explain biosilification at the micro-scale, but not yet the emergence of regular patterns on the meso-scale.

My project combines theory and experiment to understand the mechanism of valve pattern formation, using  Thalassiosira pseudonana as a model organism. Currently, we investigate an unusual reaction-diffusion model that generates growing rib patterns as observed experimentally inside the silica deposition vesicle of dividing diatoms, where new valves form de novo. In parallel, we perform electron microscopy of developing valves and establish automated image analysis algorithms to characterize the morphodynamics of biosilica valves at different developmental stages.

Our aim is to identify possible mechanisms of self-organized pattern formation at the meso-scale during cell wall biogenesis in diatoms.

How to build a muscle? Striated muscles are organized in pseudo-crystalline structures, called sarcomeres.They contain three different types of filaments. Sarcomeres consist of polar actin filaments crosslinked at their structural plus ends to the Z-disc, while their minus ends face the center of the sarcomere, where they interact with anchored bipolar myosin molecular motors. The giant protein Titin serves as an elastic spring that links the actin and myosin filaments. We do not understand how these elaborate structures self-assemble during muscle development. 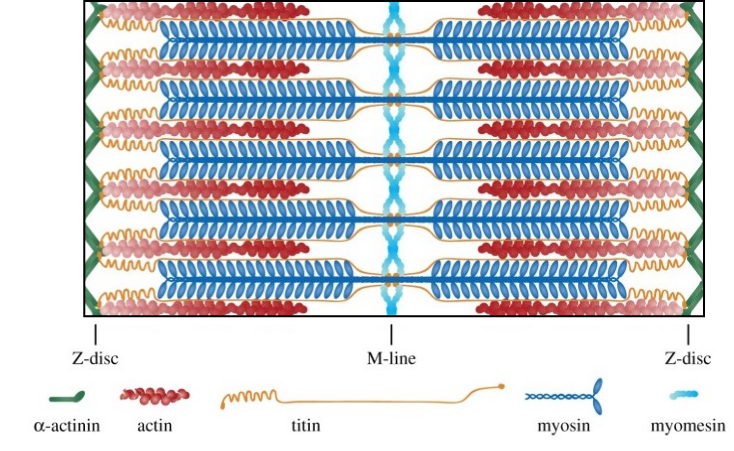 We are researching the development of myofibrils during myofibrillogenesis, when the proteins that make up muscles self-organise into sarcomeres, and eventually form in to highly ordered crystal-like structures.

In order to study the formation of myofibrils, we are developing Matlab-based feature detection algorithms. Existing feature detection algorithms work well to track fully developed muscles, however, these typically rely on the very regular final patterns to identify sarcomeres. This means these algorithms fail to detect sarcomeres well during myofibrillogenesis. Instead, we use a more general approach combining information from multiple channels from fluorescence microscopy to identify both individual sarcomeres and larger myofibrils. We apply our algorithms to multi-channel fluorescence images of Drosophila during myofibrillogenesis, provided by experimental collaboration partners from the Schnorrer lab (IBDM, Marseilles).

By tracking large numbers of sarcomeres in these images, we hope to identify key features revealing how muscles change during the fundamental formation stages, and identify the mechanisms used to build muscles.

Can artificial cells process information? The PEN-DNA reaction provides a useful toolbox to create chemical reaction networks. While it can ultimately be used to create complex biological signal processing systems, we focus, as a start, on one single autocatalytic reaction inside a single compartment. Mathematical and computational modelling of the system can help to obtain a better understanding of the spatio-temporal dynamics and to calibrate model parameters. This can then be used to simulate larger networks in silico in the future. We are collaborating closely with the Tang group at the Max-Planck Institute of Molecular Cell Biology and Genetics Dresden, who perform the experiments.

Purposeful motion requires an orchestrated interplay of motility and sensation. We studied this interplay in the exemplary context of sperm chemotaxis, a process that guides sperm cells on their journey towards the egg. We characterized a navigation strategy along circular and helical paths that is enjoyed by sperm and other microswimmers, but that differs fundamentally from bacterial chemotaxis. This novel navigation strategy is remarkably efficient and robust and reflects perfect adaptation to a noisy environment. Current research aims at understanding quantitativlely the chemotactic signaling system of sperm cells, and to identify general design principles underlying its amazing sensitivity. 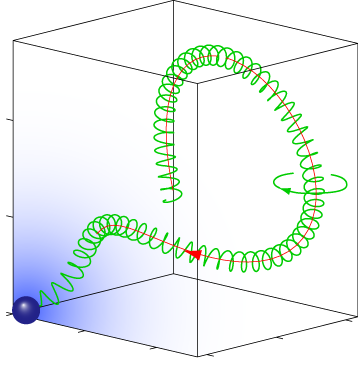 The eukaryotic flagellum is a best-seller of nature: These slender cell appendages propel sperm and many other microswimmers, including disease-causing protists. In mammalian airways or the oviduct, collections of flagella beat in synchrony to pump fluids efficiently. We use theory and experiment to elucidate a mechanism of synchronization in the model organism Chlamydomonas, a green algal cell that swims with two flagella like a breaststroke swimmer. Our analysis shows how synchronization arises by a coupling of swimming and flagellar beating and characterizes an exemplary
force–velocity relationship of the flagellar beat.

Flagella are higly conserved cell apdendages that are powered by molecular motors and can beat regularly like a whip. Many microswimmers including sperm cells and algae propel themselves using flagella; in our lungs, epithelial cells use flagella to transport mucus. We study the mechanics of flagellar bending waves and resulting low Reynolds number flows to understand flagellar self-propelsion in two model systems: sperm cells and the flagellated green algae Chlamydomonas. In the past, high-precision measurements of a wiggling motion accompanying sperm swimming allowed us to callibrate its hydrodynamics. From this, we predicted sperm swimming across scales and explained how sperm cells swim in cirlces. This collaboration with the Howard lab at MPI CBG will be continued to study Chlamydomonas swimming. 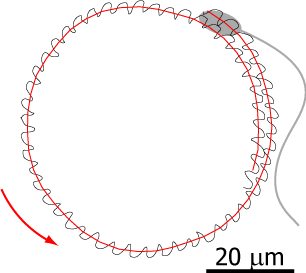 The liver represents a “chemical factory” that is characterized by intertwined transport networks for toxins and metabolites. Each hepatocyte cell interacts with two space-filling networks which either transport bile or blood through bile canaliculi or sinusoids. How these networks grow and establish their distinct geometry to supply all cells whilst providing robustness with respect to perturbations remains elusive.

In this project, we elucidate design principles of liver architecture and network self-organization to ultimately understand bile and blood transport in the liver — pursuing a two-fold approach: (i) We analyse high-resolution imaging data of cell membrane compartmentalisation in mouse liver tissue. For this, we propose a nematic tensor formalism to characterise an unconventional type of hepatic cell polarity. Our analysis reveals global patterns of aligned cell polarity on the scale of the liver lobule, the functional unit of the liver, thereby characterizing the three-dimensional liver tissue as a biaxial nematic liquid crystal. We quantify co-alignment of hepatocyte cell polarity and transport network anisotropy. (ii) We then ascertain the functional relevance of this network geometry for robust transport, seeking to elucidate the relationship between local network properties and global transport properties. For that aim, we perform flow simulations in reconstructed bile canaliculi networks as well as in synthetic networks simulated by sets of simple local rules. With this approach that bridges physics and biology, we seek to link structure and function of transport networks in liver tissue.

During embryonic development and regeneration, multi-cellular organisms face the challenge of robustly patterning their specific body plan adjusted to organism size, using a set of morphogenetic rules. This ability is particularly astonishing in animals capable of regeneration such as flatworms, which can reestablish an appropriately scaled body plan in amputation fragments of arbitrary size. Recently, molecular candidates defining head-tail polarity have been identified.

The simplest model to spontaneously generate head-tail polarity based on graded concentration profiles of signaling molecules is the classical reaction-diffusion system introduced by Turing. However, the resulting patterns do not scale naturally, since diffusion coefficients and reaction rates define fixed characteristic length scales. Together with a talented PhD student, Steffen Werner, we investigate minimal requirements for robust pattern formation systems that are both self-organized, yet, unlike Turing patterns, scale with system size. We propose novel feedback mechanisms that augment classical Turing patterning to allow for robust scaling of reaction-diffusion patterns by self-consistently adjusting its length scale to system size. Thereby, we identify general principles for self-organized and self-scaling pattern formation.

Mechanosensing and the emergence of cytoskeletal order

Tissue cells actively adhere to neighboring cells (or an in vitro substrate) and extert cytoskeletal forces, thus probing their mechanical environment. Substrate stiffness can guide cytoskeletal reorganization, driving the parallel alignment of actin bundles (nematic order) and the formation of acto-myosin crystals (so-called myofibrils) in developing muscle cells. To understand the emergence of cytoskeletal order, we develop minimal descriptions of interacting cytoskeletal force generators. We envision a hierarchy of different actin order that underlies the formation of force-generating myofibrils in muscle cells and thus theoretically address the ultimate question: How to build and regenerate muscle?