Published on Tue, 22 May 2018 in ORCHESTRATION (PATH ACTIVITIES)

The Chair for Compiler Construction just moved to the new cfaed building. The group of Prof. Castrillon left the old address at Georg-Schumann-Str. 7A and is now to be found at

Published on Fri, 18 May 2018 in ORCHESTRATION (PATH ACTIVITIES)

On 16 and 17 May 2018, Prof. Spencer Sherwin (Imperial College London) visited cfaed and gave a talk on recent developments of the Spectral Element Method achieved in his group.He discussed about common research questions related to the Spectral Element Method which is used in the ORCH path as an application challenge for running codes on wildely heterogeneous hardware. At this occasion Spencer Sherwin also participated in the defense of Karsten Bock dealing with high-order surface representation.

Last week, the IEEE Rebooting Computing 2017 Industry Summit on the Future of Computing was held in Washington, DC. The cfaed Strategic Professor for Compiler Construction Jeroimo Castrillon was invited for a talk within the Innovation and Ideas Panel. See his presentation as well as the talks of Bing Liu (University of Illinois at Chicago), Robert Voigt (Northrop Grumman Corporation), and Dario Gil (IBM Research) which are followed by a panel discussion.
cfaed supported "Rebooting Computing Week 2017" as a Silver Patron. 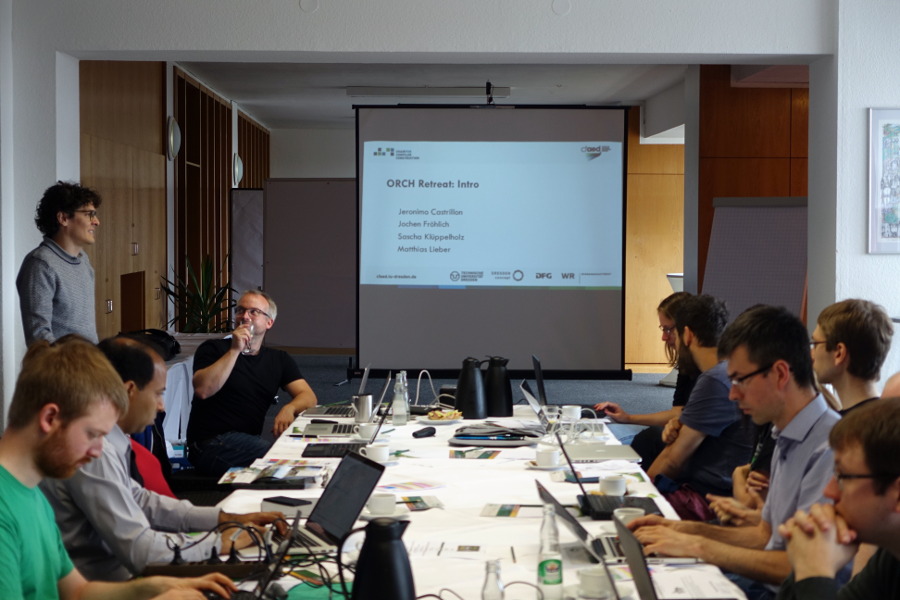 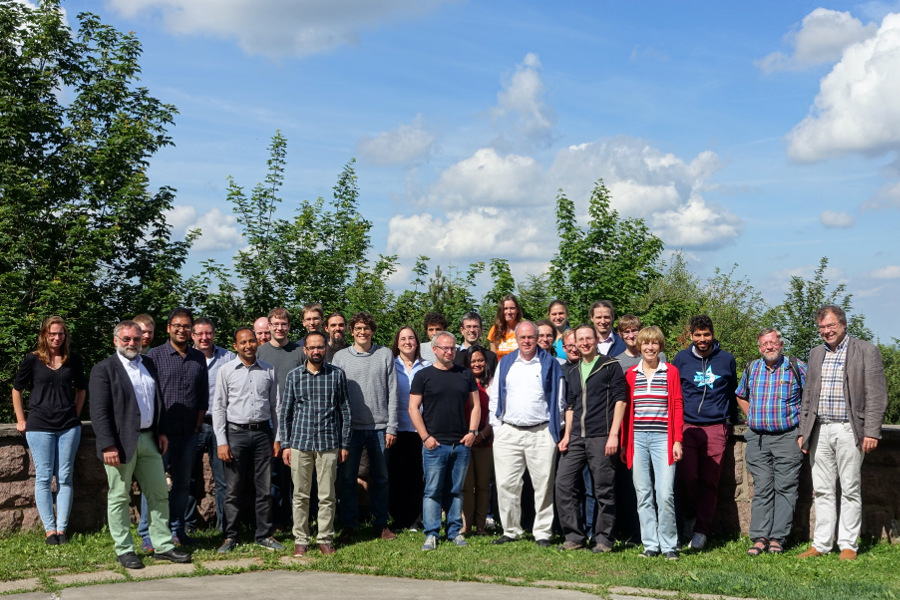 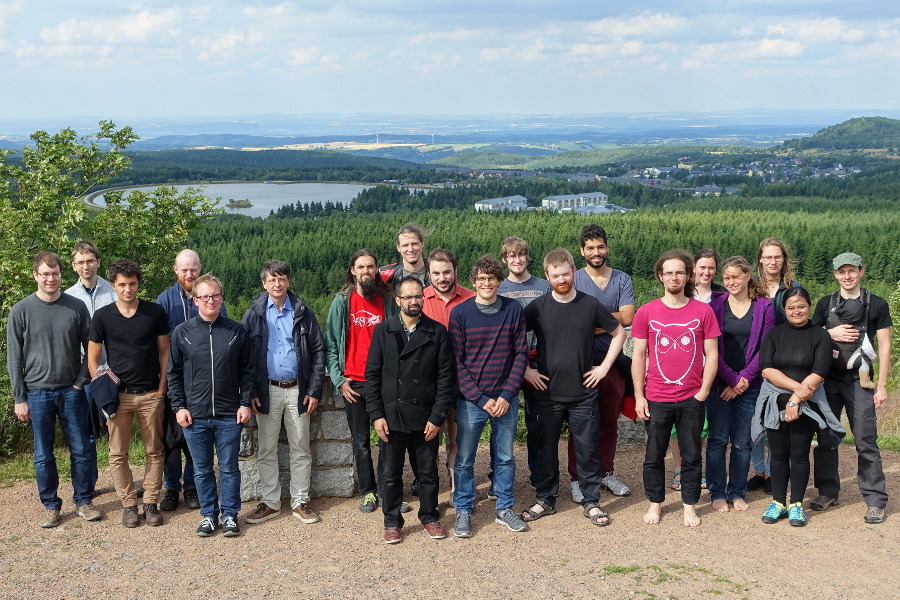 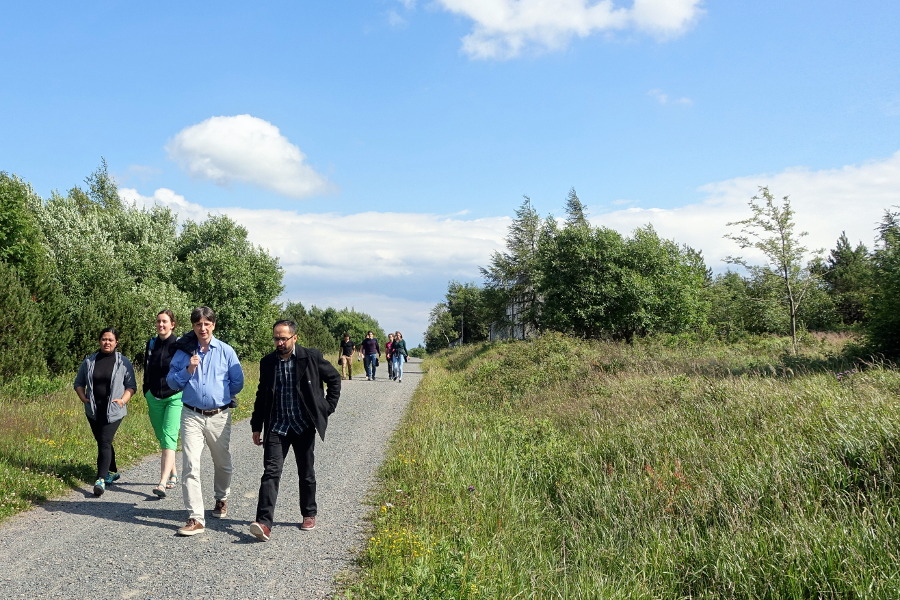 The PhD students, postdocs and investigators of the Orchestration Path met from 3rd to 5th July for the annual retreat in Altenberg on the ridge of the Eastern Ore Mountains (Osterzgebirge). Most of the time was dedicated to intense working sessions about collaborative projects and future research ideas. Additionally, the invited talk by Diana Göhringer, the new professor for adaptive dynamic systems at the faculty of computer science, and the participation of Steffen Lange and Jens Karschau two postdocs from the Biological Systems Path have been used to discuss and initiate future collaborations. We also enjoyed the nice weather on a short hiking tour to Kahleberg. 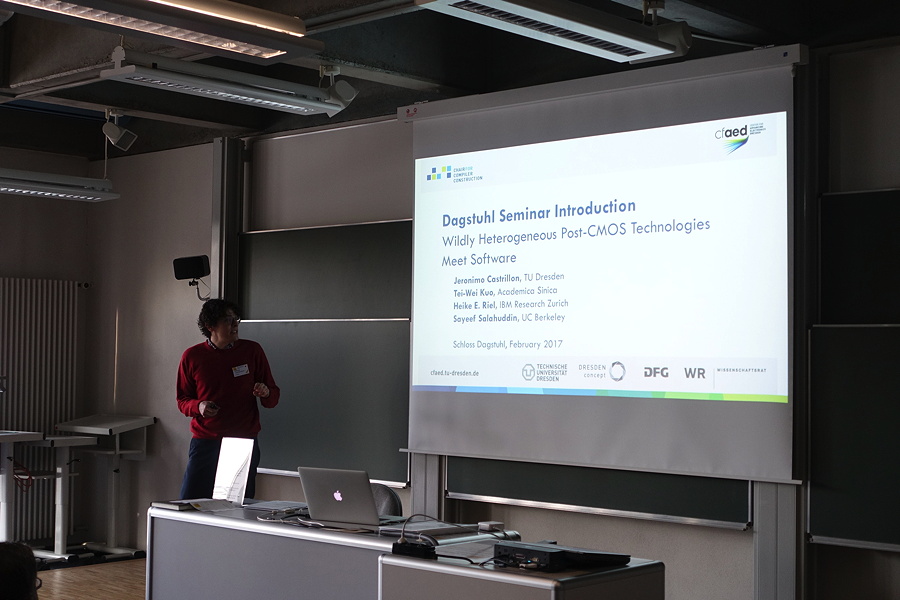 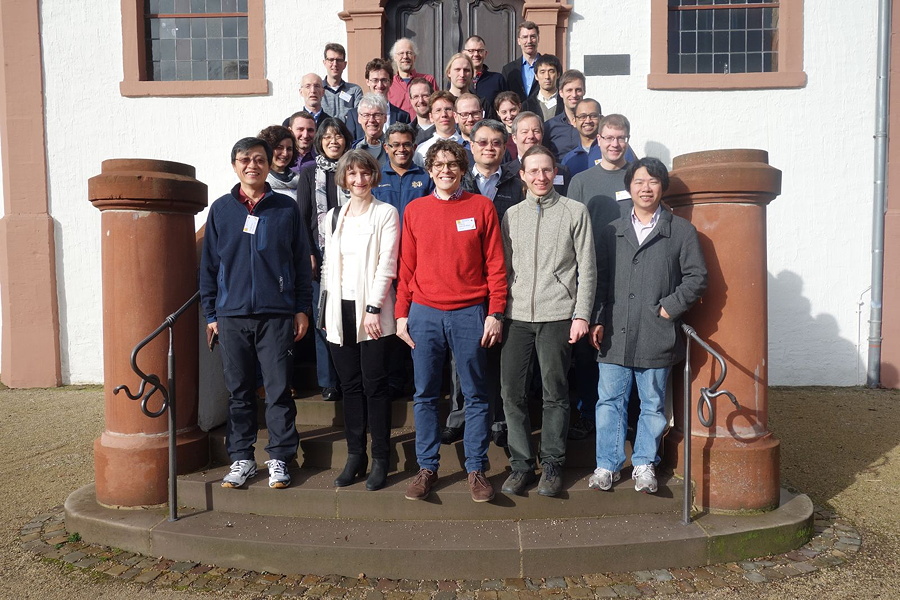 From February 5 to 10, 2017 the Dagstuhl seminar 17061 „Wildly Heterogeneous Post-CMOS Technologies Meet Software“ took place, organized by Jeronimo Castrillon (TU Dresden, leader of the Orchestration path), Tei-Wei Kuo (National Taiwan University), Heike E. Riel (IBM Research Zurich), and Sayeef Salahuddin (University of California, Berkeley). The 30 participants, among them 5 from cfaed, enjoyed one week of interesting talks and intensive, interdisciplinary discussions about the challenges and opportunities of advancing computing beyond current CMOS technology. The participants covered the whole spectrum from post-CMOS materials research up to software development for future heterogeneous computing systems. During the next months a report about the seminar will be compiled and made available at the seminar website. 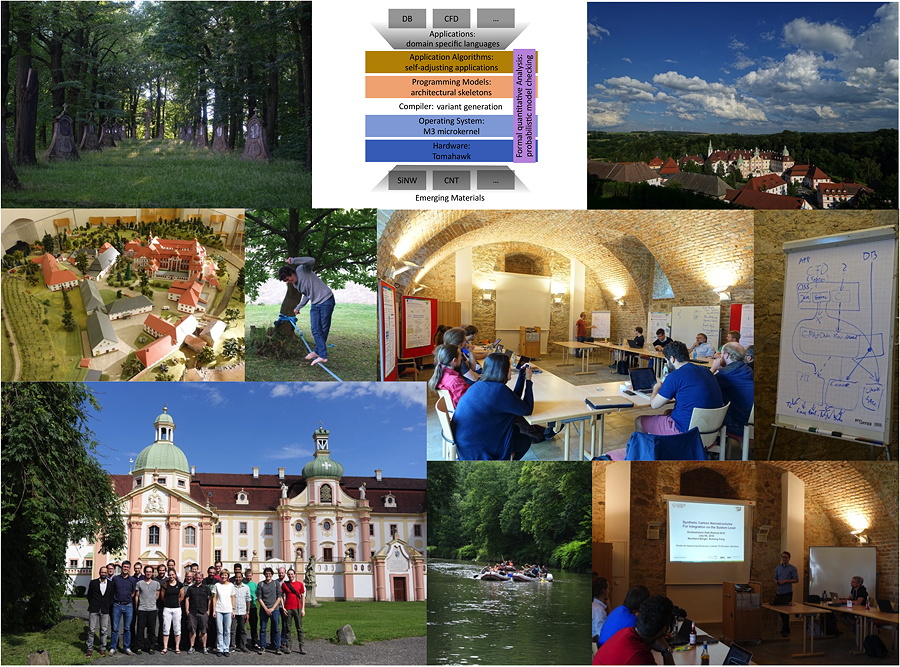 In the first week of July, 2016 the Orchestration Path held its annual retreat in the monastery St. Marienthal (Ostritz). The PhD students, postdocs and investigators met and discussed recent developments and results achieved, worked on collaborative projects and exchanged ideas for future cooperations. Overall, it was a very intensive week with inspiring talks by the investitors, an invited Talk by Reinhard Berger of the Molecular Functional Materials Group on Synthetic Carbon Structures for Integration on the System Level, many fruitful discussions within and outside the working sessions completed by a boat&bike tour as team building event.

Published on Tue, 03 May 2016 in ORCHESTRATION (PATH ACTIVITIES)

The path leader of the Orchestration path, Jeronimo Castrillon, is one of the four organizers of the Dagstuhl Seminar: "Wildly Heterogeneous Post-CMOS Technologies Meet Software", February 5–10, 2017. The aim of this seminar is to bring together computer scientists with experts in emerging technologies and researchers working interdisciplinarily across the fields, to foster a mutual understanding about the challenges and opportunities of advancing computing beyond current CMOS technology.

In April, 2016 the Orchestration Path invited Tal Ben-Nun from Hebrew University of Jerusalem as a visior. In his talk he reported on his recent and ongoing work on memory access patterns [1].

Abstract: GPUs play an increasingly important role in high-performance computing, accelerating applications ranging from machine learning and computer vision to quantitative finance. In spite of their popularity, GPU programming remains a challenging task. Manual management of the multi-level memory hierarchy, inter-device synchronization, and various development constraints often generate lengthy, error-prone, and architecture-specific code. Therefore, it is imperative to develop new programming paradigms for efficient utilization of GPU and multi- GPU systems, without sacrificing code simplicity and portability. The talk presents Memory-Oriented Programming (MOP) - a data-centric programming model organized around memory access patterns. MOP categorizes parallel algorithms by their input and output parameters, where each parameter is characterized by a single pattern. Using these patterns, which cover most existing GPU applications, we show that it is possible to write short and intelligible code that attains high performance on a variety of GPU architectures and multi-GPU nodes. Furthermore, we demonstrate that the model can be used to increase the resilience of multi- GPU nodes by providing transparent failure protection mechanisms. We show that the resulting code is on par, and in some cases outperforms, existing manually optimized production-grade libraries, exhibiting near-linear speedup on a single node with multiple GPUs. Performance is measured on fundamental computational operations, as well as real-world applications in deep learning and non-negative matrix factorization.

The project "A compiler approach for optimizing matrix operations in spectral-element methods" was kicked off with members from the Chair for Compiler Construction and the Professur für Strömungsmechanik. The project connects two layers of the Orchestration Stack, namely, algorithms and compilers. This is a so-called seed grant to start exploring languages and optimizations for spectral methods. We expect this activity to lead to a continued collaboration between the chairs. 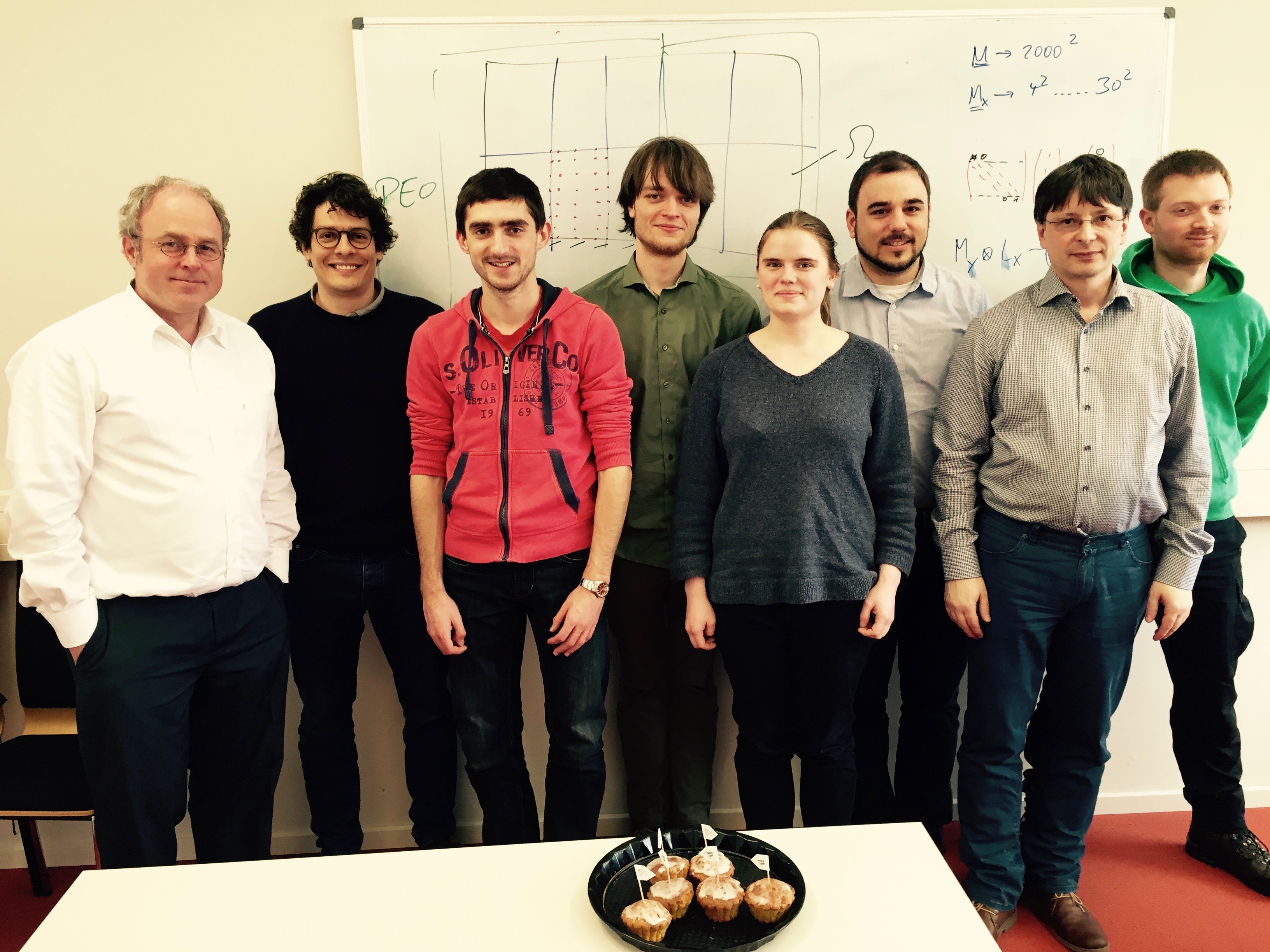 A workshop on attribute grammars was organized by Prof. Uwe Aßmann -- Chair of Software Technology at the TU Dresden, and Prof. Wolf Zimmermann - Chair of Software Engineering and Programming Languages at the Martin Luther University Halle-Wittenberg and took place on February 2nd, 2016.

A lively discussion of similarities, differences and overlaps followed the nine talks. For instance, both groups use attribute grammars to generate sets of linear equations to solve various, domain-specific problems.

Another workshop to follow up on the lively discussion and to intensify the exchange of the groups is expected to take place in May 2016.