In the new laboratory of cfaed in the basement of the Barkhausen Building, organic molecules are observed at minus 268 degrees Celsius. With a low temperature scanning tunneling microscope, Francesca Moresco and her group analyze the behavior of organic molecules on metallic and semiconductor surfaces. Her fundamental research helps to develop new model systems for applications in electronics and computing.

Since its invention in 1981, scanning tunneling microscopy (STM) has made possible to image surfaces and adsorbates with atomic resolution, but also has opened a completely new way to build structures in a bottom-up approach. With this microscope as a tool, a novel scientific and technological approach started, where nanostructures can be built atom by atom. Thanks to STM, scientists have today the opportunity to design new functional nanoscale materials and to produce tiny nanomachines.

The work of the group focusses on the bottom-up construction of functional materials and structures for electronic applications, investigated by scanning probe microscopy (SPM) and spectroscopy at low temperature.

The main research projects of the group are listed below.

We coordinate the MEMO (“Mechanics with Molecules”) FET Open Project of the European Union (Horizon 2020), which started in October 2017. It involves research groups from six different countries, from theory over experimental physics to synthetic chemistry . The main objective of MEMO is to design molecular gears that perform collective and synchronous motion. The MEMO project is established to settle the basis of molecule mechanical complex machinery using the collective movement of single molecules. All steps of molecule mechanical transmission are investigated, from molecule-gears to nanofabricated solid state nano-gears using the motive power of single molecule-motors.

Since more than 40 years, the possibility to replace solid-state transistors by molecular electronic devices in ultra-miniaturized circuits is actively explored. Serious limitations of this approach are the low conductance and low power gain of a molecular device. An alternative approach is to develop an atomic-scale technology, where surface electronic circuits are constructed by manipulating atoms of a passivated semiconductor surface. In this frame, we recently presented a molecular switch activated by electrical pulses that can provide the logical input to a surface logic gate by passivating and de-passivating a DB dimer [J. Phys. Chem. C, 120, 27027 (2016)]. Moreover, we demonstrated the functionality of a NAND logic gate in a Y-shaped asymmetric molecule. 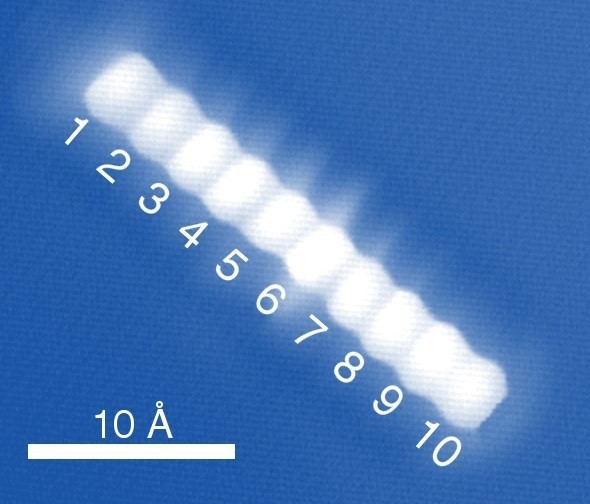 Long acenes are promising candidates for spintronics and organic electronics because, by increasing the number of benzene rings, a reduction of the energy gap and a stronger radical character are expected. However, the synthesis of large acenes is challenging, and low solubility as well as high reactivity have limited single molecule investigations of acenes to the length of pentacene. We developed a successful method for the on-surface synthesis of acenes, which can be applied to acenes of increasing length. The surface-assisted reduction of air-stable precursors allowed us in particular to study single acenes molecules to the length decacene, revealing the details of their electronic structure [ACS Nano 10, 4538 (2016); Chem. Comm. 53, 1583 (2017), Angew. Chem. Int. Ed. 56, 11945 (2017)]. 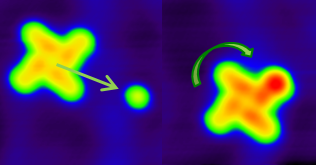 Rotation of a windmill nanostructure moving a single atom

The realization of molecular machines and motors, as well as the transmission of movement from molecule to molecule are important challenges for science and technology. Mechanical machines can compete, in terms of high-clock frequency and robustness to radiations, with electronic, optical and magnetic devices. In this frame, we recently demonstrated that an electronic excitation can be converted into mechanical motion controlled at the molecular scale. A windmill-shaped supramolecular nanostructure can be precisely moved on a gold surface by a voltage pulse applied through the STM tip and it can generate work by moving the load of a single atom (Fig.1c) [ACS Nano 7, 191 (2013); ACS Nano, 9, 8394 (2015), Eur. Phys. J. Appl. Phys. 76, 10001 (2016)].